skip to main | skip to sidebar

Tony Blair farewell and my visit to Trimden Labour Club 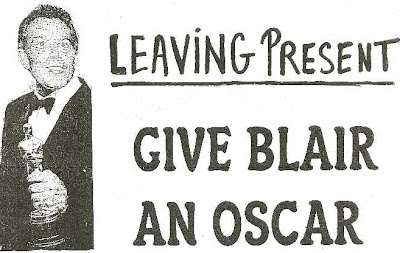 I went to Trimden Labour Club to try and give Tony Blair an Oscar for his acting, I also took a laminated poster placard. He arrived at Trimden Labour club at 7.05pm, as he walked around the car park shaking hands with his supporters, I shouted " Mr Blair, I've got a leaving present for you. An Oscar because you're the best actor Britain has ever produced". Blair ignored me and carried on, his minders looked worried. A policeman grabbed me and threatened to arrest me for a breach of the peace. I said "what for?Saying he's a great actor." I shouted again "Hey Mr Blair, you're a great actor but not as good as Elvis." The policeman threatened me again. I said "I'm not a terrorist, you guys are over the top". Blair disappeared and the policeman let me go. A bystander said "they should have arrrested him for a breach of the peace". I got the bus back to Darlington and caught the train back to Nottingham.
Posted by Lord Biro at 06:27 2 comments:

The latest poem to be penned by Lord Biro, if you haven't already guessed its about Shane Meadows, film maker from Nottingham

Throw in a sharp dialogue
like “gi us a wank”
And you’ll be laughing like me
all the way to the bank.

I’m off to Provence now
to party and rave
As I fly over Skeggie
I’ll give them a wave.

Friday 4th May
Got up, had breakfast, sour grapes. Had a bad night because of a rotten pint earlier in the day. Consequently, spent most of the evening in the Harvey Hadden Stadium linging near the bog. When the result came I was bottom of the poll (115 votes), nowhere near UKIP and the Invisible Green. That lazy middle-class swine didn't even turn up on the platform, neither did the Lib-Dems and two of the Labour candidates. To top it all when I got home at 3 am and finally got to sleep I dreamt I was forced onto the floor in Wollaton Park by Tory leader Georgina Culley (2,670 votes) and abused in a most inappropriate way? I've heard of electoral revenge but she's pushed it a bit too far on this occasion.

Still, thank God it wasn't "Soft Dick" or "Corporal Cowan". I wonder where they were? Hopefully chasing Jon Collins and Dave Trimble round the sadly missed toilets of the old Market Square waving their "choppers". Now that would be worth dreaming about. Happy New Basford- the x-candidate for Wollaton!
Posted by Lord Biro at 07:54 No comments: 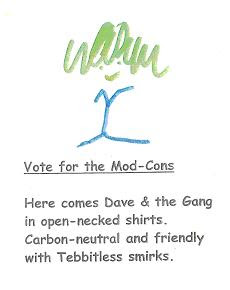 Get up and have breakfast, Welsh rarebit and a peach over the road at my friends house. I’m vaguely thinking of going up to Wollaton this afternoon and putting up some of my political artwork on a boarded up shop window on Bramcote Lane but can’t summon up the energy.

I wonder how many votes I’ll get tonight. It would be nice to beat UKIP and the invisible Greens.

Its time to vote for the candidates in my ward (Berridge) I shan’t vote for the Tories but I’ll end today’s blog with a poem and drawing about them. 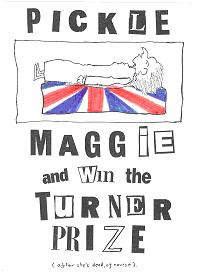 Get up and have breakfast, bread and cheese. Radio Nottingham has been trying to contact me for an interview but every time I ring them I always get a different person, or the person I want to speak to is in a meeting. What a bloody shower, I give up.

Go leafleting in Wollaton, I’ve got my jumpsuit but don’t put it on till after dinner. No body around as usual, I see more squirrels than people. I should have done the Thatcher flyer I took to the Tory conference in Bournemouth last year. “Pickle Maggie and Win the Turner prize (after she’s dead of course). That might wake them up!

Take off my jumpsuit and go in the “Rodney”. Have a pint, then walk down the road, go into a graveyard and put it on again, a most appropriate place. Stroll down Wollaton Vale waving to the homecoming traffic and go in the “Toby Jug” for a pint. That’s its Folks, the campaigns over! 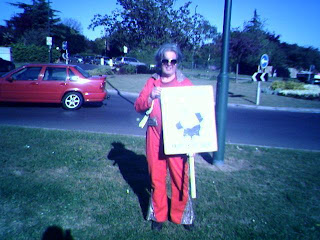 Get up and have breakfast, muesli and yoghurt. Its ten years since Blair was elected, the media is full of it, his legacy etc. What a bunch of middle-class bores they all are.

Go to Wollaton leafleting, nobody about as usual. I pack up early and go home. That evening me and my treasurer head for the traffic island near the Hemlock Stone pub in Wollaton. I’ve got a big placard “Get Stuffed Teddy Blair”. Stand at the island between 5 and 7 pm, get lots of hoots from cars plus the “finger” from some skinheads. They must be from the Shane Meadows party and have read my sarcastic poem about him in the Evening Post “ Shane West- Bridgford”.

Some young girls take one of my leaflets. “Why don’t you like Tesco?” says one, “It’s the Ultimalte Munchfest”. “Are you mad?” asks another, “It’s better than the crappy old Co-op”. “Its taken over the High street, that’s why I don’t like it”. They saunter off into the Ultimate Munchfestering future, good luck girls!

We trudge to the 19th century front bar of the Admiral Rodney, no Munchfest in here, but I do get two votes, Ah-huh!
Posted by Lord Biro at 05:17 1 comment: 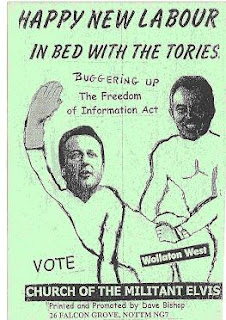 Get up and have breakfast, porridge! Go leafleting in Wollaton with some “Lesbian Elvis” leaflets plus “Blair-Cameron” flyers. I shove one of them through the Catholic priest’s letterbox on Bramcote Lane. They’re experts on buggery that lot, I wonder if I'll get his vote? Go to the Admiral Rodney for a pint. A bloke’s read my Wayne Rooney flyer and says he’s going to vote for me. Well that’s two votes! Watch out ye True Blue thoroughbreds, the Red Elvis Nag may spring a surprise yet on the home straight! 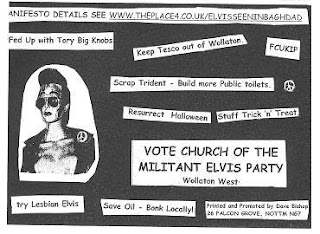 Get up and have breakfast, bread and cheese again. Go to Wollaton, arrive at Bramcote shops at 10 am, early for a change. It’s the first time I've worn the red jumpsuit in the Campaign. Lots of conversations concerning my placard “Save Oil – Bonk Locally”. “What does it mean?” says one woman. “Its means don’t go miles to have affairs, save energy and have them round here” “I do!” she says, I’m about to ask her where she lives but she marches briskly away.

A girl with a cider can asks me what the colour of Elvis’s co-star Anne-Margaret’s hair was. “Red” I say, “Just like yours”. She looks pleased, unfortunately she lives in Beeston so no vote there.

Call it a day and go home, on the way I have my picture taken in the Market squar 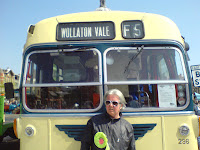 e next to an old Wollaton Vale bus (1942). Get in the house, make a cup of tea and read the Guardian, Labour and Tory MPs are colluding to try and get themselves exempted from the Freedom of Information Bill. It was talked out last week but has ‘miraculously’ re-appeared and is due to be debated on May 18th when the MPs will be back at Westminster after the local elections. I bet it will get through this time, the shameless swines. I decide to re-invent my Blair-Cameron flyer and add some new words “Happy New Labour in Bed with the Tories – Buggering Up the Freedom of Information Act. 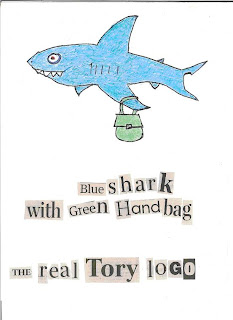 Get up and have breakfast, Welsh rarebit, well it is Sunday. Buy the Observer, Henry Porter going on about the Freedom of Information Bill. We are sliding into a Police State courtesy of an arrogant government and a supine electorate. Cameron's lot aren’t interested in Civil Rights, they’ll just be as bad if they’re elected despite all this “Hug a Hoodie” gush. (See real Tory Logo)

Go to Wollaton and do some leafleting, end up in the Wollaton Golf Club. It’s very posh, I want to give the manager a flyer but he’s ill, I have a drink in the bar, a pint of Mansfield, red Elvis jump suit, sun glasses etc. A woman waves at me from the restaurant bar. “Dave, Dave, it’s me, don’t you remember?” Blimey, she used to be my girlfriend in 1957, 50 years ago. We talk for a while about the old days but she has to leave because it’s a men only bar. Well, well we’ve both changed a lot but this place hasn’t. In this culture of manic mindlessness, going nowhere, I find that strangely comforting. I’m more conservative than Cameron or Blair, they would hate the place. Four more days to go!
Posted by Lord Biro at 08:02 No comments:

Get up have breakfast, bread and cheese and a cup of tea. Sort out some leaflets and go to Wollaton. Buy the Evening Post on the way, their gossip guide has printed my manifesto piece concerning my call for a National Piles Day on Wayne Rooney birthday. They’ve called me a genius, well it makes a change from being called barmy.

Leaflet round Wollaton Park, “Soft Dick”, “Corporal Cowan”, “Elvis and his Dog” and “George the Gorilla” the stuffed ape from Wollaton Hall, get home about 2pm. The focus team are getting uneasy about the “Soft Dick” leaflets. They are frightened I might get elected and find them a job, no more late morning lie-in’s, lads and lasses!
As I sit there my mind in turmoil, a crumpled piece of paper lands on the carpet. I read it, it’s from Elvis “Dear Dave, forget about small fry like “Soft Dick”, stick to smearing Bush and Blair. Use that photo I sent you recently, I took it from a cloud over the White House using a long distance tele-photo lens. As for Cowan, stick his file in the “john”. That’s the best place for him! Yours, The King. PS. “Jerusalem Elvis” what a tosser! Though I wouldn't mind giving his missus one.
Thanks Elvis, Stuff the local Labour Party, why should I do their dirty work. Peace of mind at last?
Posted by Lord Biro at 07:30 No comments: 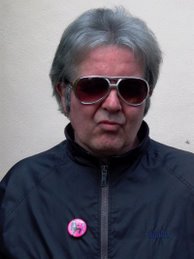